From 4th May to 13th June 2017, the Jünger Galerie in Vienna will be hosting a new exhibition by casaluce/geiger titled Il profumo di Luisa Casati. The Italo-Austrian artist, who for years has been investigating the theme of identity in all its multifaceted forms from the photographic disguise to cyborg identity, reinterprets the Marchesa Casati in the light of the shamanic possession, letting herself be pervaded by the iridescent world of the lady who once said: “I want to be a living work of art.”

The Divine Marchesa was a key character in the period between Art Nouveau and Art Déco, an unrelenting socialite, she lived in Venice, in the residence that Peggy Guggenheim later on chose as her own abode, in Paris, where she went bankrupt, and in London poor but still a woman of undimmed elegance. Wherever she went she was seen as an icon of style and many are those who paid tribute to her through photography, painting and fashion. The works by casaluce/geiger, here exhibited for the first time, have been realized between 2014 and 2017, and they include acrylic drawings on antique prints and stock photos, photographs and an olfactory installation with a perfume of oriental essences created for the occasion, and from which the exhibit takes its name.

The introduction to the artworks on display is by Luca Scarlini, author of the book “Memorie di un’opera d’arte. La Marchesa Casati” (Skira) 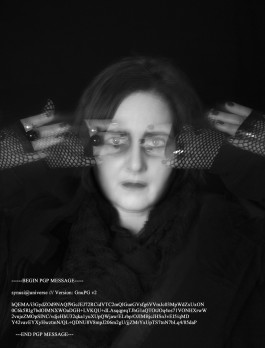 casaluce/geiger here evokes the elegance of an icon of sublime elegance at the beginning of the twentieth century, the Marchesa Luisa Casati Stampa, creator of a very intense journey devoted to the glorification of her own image, who anticipated body art, actionism and performance art. Within the magnificent Venetian palace on the Canal Grande where Peggy Guggenheim later chose to live, a place that has no traces today of her golden passage, she used to give lavish soirees with artists, nobles, prostitutes, interior decorators, socialites and actors. In Paris, at the spectacular Le Vésinet mansion that made her go broke, dressed as Count Cagliostro during a masquerade, she attempted to defy a sudden storm with a crystal sword and ended up with a ruffled wig while her guests were forced to flee. In Capri, island of sunshine, she managed to transform doctor and writer Axel Munthe’s house into a black sanctum, wandering around like a mournful nightly presence, even in plain daylight. In London, bankrupt but always loyal to her style, she was chased by Cecil Baton, master of photography, who wanted to capture her as a ghost image of elegance; at the beginning of the Seventies, during the creation phase of his Ziggy Stardust character, David Bowie drew on the flamed-red of the magnificent portrait by Augustus John, which is part of the National Portrait Gallery’s collection.

Today, the artist adopts possession as a means to connect to a woman who chose determinedly to go against the rules of the society of her day, to become an icon. The shaman sings, evokes and makes it hers: the ritual allows to remove all the identity barriers, to overcome the boundaries of the self. The title of the exhibition is Il profumo di Luisa Casati, the seer, sleep-walking through Venetian nights along with her wild beasts and black servants that seemed to come out of a Tiepolo’s fresco, is captured like a spirit into a glass ampoule and transformed into a fragrance, a scented presence, in a series of works of art. The places where the lady lived are all new chances of evoking her lure, like the fitting quote from Shakespeare’s Anthony and Cleopatra that reads “infinite variety” inscribed on her tombstone, at Brompton Cemetery. The metamorphosis was indeed the Marquise’s favourite contemplation, as we see in Alberto Martini’s portraits, where she is dressed up as Cesare Borgia or as an Indian Chief; but also for casaluce/geiger, who loves to represent herself as the Virgin Mary, as Marilyn or as a man while shaving himself. Thus, possession allows the metamorphosis to take place: the image of the person we look for penetrates the physiognomic traits of the artist-shaman who evokes her and it is not a question of physical resemblance, rather of loyalty to a gesture, a pose, a glance. Master of a metaphysical make-up, Casati used atropine in order to have dilated pupils like a bird of prey, and surrounded her eyes with a velvet mask to recall the deepness of the Night. Like one of the best “noses” in the fragrance industry, a savant in the art of distilling aromas, casaluce/geiger smells the multicolour scent left by the lady in the collective imagination and reinterprets some renowned mise-en-scenes, in the predestined assonance between casaluce and Casati. 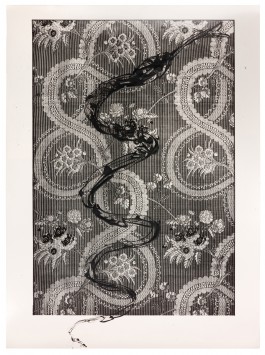 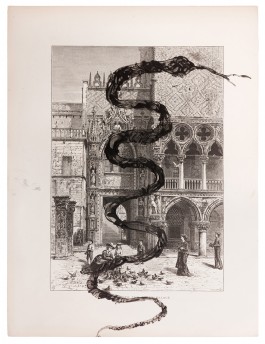 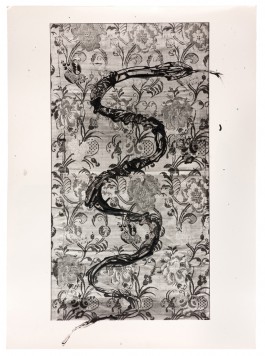 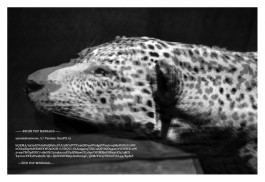 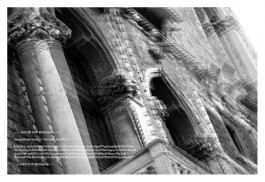 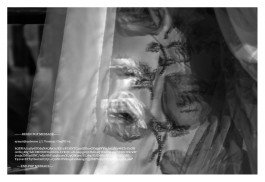 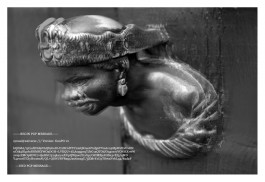 The Italo-Austrian artist casaluce/geiger bases her research on elements of “disturbance” and on the deconstruction of the “rules”, starting from the ambiguity expressed by the omission of her own personal details. Attracted by the concepts of fluidity and multiplicity, she explores the several identities of the multiple self through one of her alter egos, set in between real and virtual: the synusi@ virus cyborg. She forges the Posthuman Actionism that she presents at the PEAM with a text by Antonio Tursi. The study on disguise in photography conducted by Fabiola Naldi in the book “I’ll be your mirror” examines the theme of double through her reflected images from the Self Portrait series. In the artworks featured in the Il profumo di Luisa Casati exhibition, accompanied by a text by Luca Scarlini, the artist chooses to rethink the Marquise through the shamanic possession.Her work has been exhibited in a number of museums, including the Landesmuseum Niederösterreich, the Atelier Augarten - Österreichische Galerie Belvedere, the Q21 - MuseumsQuartier Wien, the Stadtgalerie Bamberg - Villa Dessauer, the Kunsthalle Bratislava, the Kajaani Art Museum, the ikob Museum, the Kymenlaakso Museum, the Bangkok Art and Culture Centre. www.casaluce-geiger.net

Luca Scarlini is a writer, playwright for theatre and music productions and a performance artist. He teaches storytelling techniques at the Scuola Holden in Turin, he has collaborated with numerous Italian and European Theatre institutions, such as the National Theatre in London, the Lod company in Ghent, the Festival Opera XXI in Antwerp, La Bâtie and the Théâtre Am Stram Gram in Geneva. He writes scripts for music and dance productions: from 2004 to 2008, he was artistic advisor of the MilanOltre festival at the Teatro dell’Elfo in Milan. In 2006, he was the TTv artistic director in Bologna, in 2005 he coordinated the World Book Capital activities in Turin at the Atrium space. He has extensive experience as a storyteller performing both alone and alongside musicians, dancers and actors, in theatres, museums and historic locations; he has worked, among others, with Martin Bauer, Monica Benvenuti, Davide Botto, Sylvano Bussotti, Nora Chipaumire, Luisa Cortesi, Massimiliano Damerini, Francesca Della Monica, Francesco Dillon, Ane Lan, Alberto Mesirca, NicoNote, Elisabetta Pozzi, Emanuele Torquati, Luca Veggetti; and taking part in festivals in Italy (he has been in the Mantova Festivaletteratura’s programme for many years). Speaker for Radio Tre, he has hosted the Museo Nazionale radio program, and curated exhibitions on the relationship between art, music, theatre and fashion. Among his recent books are: Lustrini per il regno dei cieli (Bollati Boringhieri); Sacre sfilate (Guanda) dedicated to fashion in the Vatican; Un paese in ginocchio (Guanda); La sindrome di Michael Jackson (Bompiani); Andy Warhol superstar (Johan & Levi); Siviero contro Hitler (Skira); Memorie di un’opera d’arte (Skira), biography of the Casati Stampa Marquise written published concomitantly with “The Divine Marchesa” exhibition at the Fortuny Palace; Conosci Milano? (Clichy); Ziggy Stardust (add). www.lucascarlini.it

“She knew how to exploit her ‘type’ to the fullest. It was no longer a matter of pleasing, displeasing or astonishing. It was a matter of dumbfounding.” (Jean Cocteau)

Luisa Casati (Milan, 1881 - London, 1957), following the early death of her parents, the textile manufacturer Alberto Amman and Lucia Bressi, became a very wealthy heiress. She married the Milanese Marquis Camillo Casati Stampa di Soncino, giving birth the year after to their only daughter, Cristina. Art collector, patron, inspiring muse for great artists, novel writers and poets, she also inspired the Italian poet Gabriele D’Annunzio, with whom she had a love affair and who named her “Divina Marchesa”. She was the inspiration of artists such as Giacomo Balla, Cecil Beaton, Umberto Boccioni, Romaine Brooks, Adolph de Meyer, Jacob Epstein, Augustus Edwin John, Alberto Martini, Man Ray, Kees Van Dongen and Ignacio Zuloaga, who captured her in their portraits and photographs. She was extremely fascinating, with kohl-rimmed eyes and pupils kept glittering and dilated by droplets of belladonna, and red-dyed hair, she used to dress with extravagant and daring style. Mariano Fortuny and Paul Poiret designed unique dresses for her. She loved to astonish going for walks with cheetahs on a lead and live pitons around her neck. Her flamboyant disguises and legendary performances at the beginning of the twentieth century make of her a forerunner of performance and body art. She even defined herself as a living work of art. She purchased the eighteenth-century Palazzo Venier dei Leoni in Venice (now hosting the Guggenheim Museum) transforming it into a luxurious residence where she hosted memorable soirees and social events. During Carnival, she wasted her capital on sumptuous parties and she even rented San Marco’s square for herself and her guests. An occult enthusiast, she was the friend of magicians, fortune tellers and mediums, and organised séances. She became owner of the Palais Rose in Vésinet, just outside of Paris, previously owned by Robert de Montesquiou and which she renamed Palais du Rêve. By the Thirties she went bankrupt and was forced to sell all her possessions and to move to London, where she died in sheer misery and was interred at Brompton Cemetery.

casaluce/geiger has realized the perfume for the olfactory installation together with Indian perfume creator Yogesh Kumar (www.dasparfum.com).